Alexis Neiers Gets Sentenced To A Year In Rehab 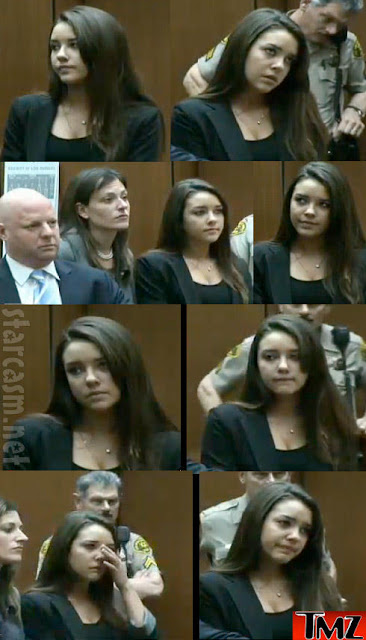 AP:
LOS ANGELES — A reality TV starlet convicted of burglarizing Orlando Bloom's house will spend a year in residential rehab getting treatment for what her attorney says is a debilitating heroin addiction.

Striking a stern tone, Los Angeles Superior Court Judge Peter Espinoza on Thursday told Alexis Neiers it would be her last opportunity for treatment rather than prison.

She spent 30 days of a six-month sentence in jail this year after pleading no contest to burglarizing Bloom's house as part of a group accused of breaking into several celebrities' homes. Probation officials arrested Neiers on Dec. 1 after finding heroin and a fake driver's license at her house during a compliance check.

Prosecutors had been asking that Neiers, 19, be sent to prison for two years.

Espinoza cited her age, her limited criminal record, and her addiction as reasons why he chose rehab instead of incarceration for the aspiring model and star of the E! Entertainment Television show "Pretty Wild."

"What we know about state prison – she'll go and receive no treatment," Espinoza said.

Saying she was now battling a lifelong addiction, the judge warned Neiers that he would not be lenient if she didn't take rehab seriously.

"If you come back to me for using heroin, you are going back to prison," Espinoza said.

Prosecutors did not comment after the hearing. Deputy District Attorney Chris Baker had noted in court that Neiers had not checked in with probation officials, nor had she refrained from using drugs or paid restitution to Bloom for the burglary. He said her actions supported sending her to state prison.

"This is a girl in desperate need of help, and I hope she can find it in a treatment program," Khero said.
at December 10, 2010
Labels: Just Sad