The roxy may or may not be reopening 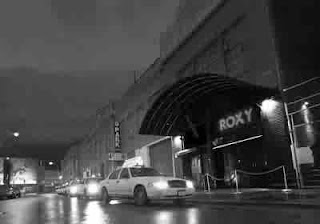 Is the return of the Roxy imminent? According to concerns citizens in the nearby neighborhood, the answer is a resounding yes. Originally a warehouse converted into a roller rink, the Roxy converted itself into a full on nightclub in the mid 1980's, and became a focal point for the beginnings of hip hop in NYC. The Roxy powered into the 90's, hosting John Blair's famously gay Roxy Saturdays, but eventually closed for good in 2007 after the building was sold to residential developers. With development plans stalled, the Roxy attempted a 2008 comeback which was derailed. Now the Roxy is ready to try again, but Chelsea residents are already signaling they will fight this license application to the bitter end. Local business owners are emailing their customers and neighbors to warn them about next month's CB4 licensing hearing, talking up how the neighborhood has changed for the better and the Roxy no longer fits in. This should be a fun one.

But now they say:
After DBTH broke the news of the Roxy's attempted comeback yesterday, Steve Lewis colors in the lines, saying that there is already trouble in paradise. The most current efforts to revive the space were led by Neal Erman, but the building's owner would only work with former Roxy frontman Gene Denino (real name). Those two couldn't agree on a deal, so the whole thing may be scrapped. Can anyone save it? Maybe, according to GNML, who says:

Although rumors of another group headed up by international DJ and all around nice guy Victor Calderone, spin right round like a record playing, Gene says he is not talking to them but is looking at another situation. My bet is John Blair who ran the long running gay-based Saturday night party will step up with investors.

Is anyone at BB really editing these pieces? Jesus. Anyway, no one really cares if the Roxy comes back or not. The community doesn't want it, and there is no proof that the consumers want this kind of operation either. But it's fun to watch these trains run themselves right off the tracks.

Sent via BlackBerry from T-Mobile