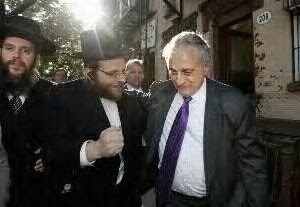 Carl P. Paladino, the Republican candidate for governor in New York, with Rabbi Yechezkel Roth, left, and another Orthodox Jewish supporter during a campaign stop in Williamsburg on Sunday.

The Republican candidate for governor, Carl P. Paladino, told a gathering in Williamsburg, Brooklyn, on Sunday that children should not be "brainwashed" into thinking that homosexuality was acceptable, and criticized his opponent, Attorney General Andrew M. Cuomo, for marching in a gay pride parade earlier this year.

"I just think my children and your children would be much better off and much more successful getting married and raising a family, and I don't want them brainwashed into thinking that homosexuality is an equally valid and successful option - it isn't," he said, reading from a prepared address, according to a video of the event.

And then, to applause at Congregation Shaarei Chaim, he said: "I didn't march in the gay parade this year - the gay pride parade this year. My opponent did, and that's not the example we should be showing our children." Newsday.com reported that Mr. Paladino's prepared text had included the sentence: "There is nothing to be proud of in being a dysfunctional homosexual." But Mr. Paladino omitted the sentence in his speech.

About an hour after Mr. Paladino's remarks, Mr. Cuomo's campaign released a statement condemning them.

"Mr. Paladino's statement displays a stunning homophobia and a glaring disregard for basic equality," it said. "These comments along with other views he has espoused make it clear that he is way out of the mainstream and is unfit to represent New York."Mr. Paladino declined a request to be interviewed after his appearance. His campaign manager, Michael R. Caputo, denied assertions that Mr. Paladino was antigay, and noted that he employed a gay man on his campaign staff.

"Carl Paladino is simply expressing the views that he holds in his heart as a Catholic," Mr. Caputo said in a telephone interview. "Carl Paladino is not homophobic, and neither is the Catholic Church."

"The majority of New Yorkers agree with him," Mr. Caputo added. He said the campaign had done its own polling.

During his appearance at the synagogue, with reporters in attendance, Mr. Paladino said: "Don't misquote me as wanting to hurt homosexual people in any way. That would be a dastardly lie."

A same-sex marriage bill was defeated last year by New York lawmakers. Mr. Paladino has said that, unlike Mr. Cuomo, a Democrat, he would veto such a bill if he were governor. But Mr. Caputo said that if the same measure passed in a statewide referendum, Mr. Paladino would uphold the law.

Brian Ellner, head of the marriage initiative for the gay advocacy group Human Rights Campaign, said that the Republican's remarks were insensitive given a recent swirl of news about suicide in the gay community and antigay violence.

The New York City Police Department announced on Friday that nine men in the Bronx had lured three men they believed were gay and then tortured them. Last month, a student at Rutgers University jumped off the George Washington Bridge after two classmates broadcast his sexual encounter with a man over the Internet.

Mr. Paladino's statements in Brooklyn were first broadcast by Azi Paybarah, a reporter for WNYC, and Reid Epstein of Newsday, on Twitter.

The back-and-forth between the two campaigns took a strange turn late on Sunday, when Mr. Caputo suggested that, on Aug. 20, a Cuomo staff member had referred to two gay male aides to Mr. Paladino as "girls." The aides were accompanying a Paladino volunteer dressed in a duck costume, and blowing duck calls, to call attention to what the Paladino campaign said was Mr. Cuomo's habit of ducking issues.

According to Mr. Caputo, the aides were approached by the Cuomo staff member and told: "If you girls don't get out of here I'm going to shove those duck calls down your throats."

Mr. Caputo said the encounter was "likely a hate crime since the Cuomo staffer clearly referenced their sexuality in his threat." The Cuomo campaign did not respond late Sunday