Woo Hoo Lohan Out On Bail! 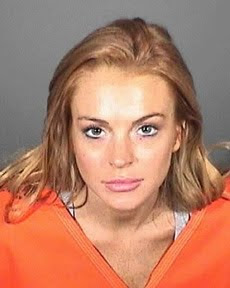 "Judge Elden Fox threw Lindsay Lohan in jail earlier today after the actress failed two drug tests and violated her probation, but Judge Patricia Schnegg, Assistant Supervising Judge for the Los Angeles County Criminal Courts, has thrown out his ruling and set Lindsay's bail at $300,000! Lindsay is expected to leave the Lynwood Correctional Facility tonight, and she'll have to have a SCRAM bracelet put on within 24 hours. The terms of her bail also dictate that she is not allowed to be in establishments where alcohol is the "chief item of sale," she can't be around known drug users, and she must submit to search by law enforcement at any time, according to TMZ."
Thanks x17 :)
at September 24, 2010